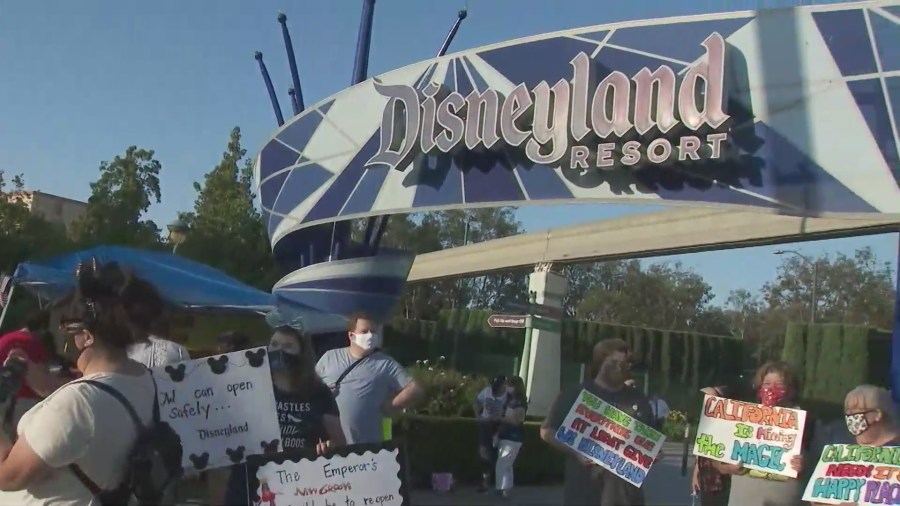 Dozens of people rallied outside Disneyland on Saturday to push for reopening seven months after the coronavirus pandemic forced a closure in March.

People, including some of the 28,000 workers laid-off by Disney’s park division, held signs that read “Open Disneyland,” “California is missing the magic,” and “Recall Newsom.”

A woman named Terri said she has worked for the company for 14 years. She understood when the park remain closed over the summer, but said that Gov. Gavin Newsom should allow Disneyland to open now.

“The governor is not allowing the park to open, but he’s not supporting anybody either,” Terri said. “He can’t have it both ways. … We all have families.”

She argued that the amusement park can safely reopen with the proper precautions.

Desi, who helped organized Saturday’s event, said she misses the experience of being a performer and trainer within her department.

“I know people who have been here 30 years who have lost their job… . It’s shocking to me,” she said.

Desi said learning about the layoffs on BuzzFeed before hearing from the company was especially painful.

Another woman named Terri doesn’t work for Disney, but said she attended the rally to provide support to those affected by layoffs by one of the top employers’ in the county.

“These are our friends and neighbors,” Terri said.

Orange County officials have also demanded the reopening of Disneyland as amusement parks elsewhere in the U.S. resume operations.

Earlier this week, Newsom announced that he was sending teams to parks in other states to learn what precautions they’re taking. On Wednesday, Disneyland announced an agreement with unions on how employees can return to work safely.

But the governor has not offered a timeline for the reopening of California’s amusement parks.

Orange County continues to report about 4.6 new COVID-19 cases per day, which puts the region in the second-most restrictive level in the state’s four-tier system. The county has confirmed 1,401 coronavirus deaths, including 10 on Friday.

SAN LEANDRO — A man who authorities said pulled a gun on officers was shot and critically wounded by...

Carrie O’Connor, 38, was killed in September while trying to maneuver a large package into the elevator. According to...

Pence, who tested negative on Sunday, according to his office, planned an afternoon rally in North Carolina, while the...

FITCHBURG (CBS) – Health officials are working on contract tracing after 28 confirmed cases of coronavirus have been linked...

Minnesota Weather: Parts Of Southern Minnesota To Get Up To 4 Inches Of Snow Sunday – WCCO

MINNEAPOLIS (WCCO) —  It’s been a week filled with snowfall — and another round looks to sweep over parts...