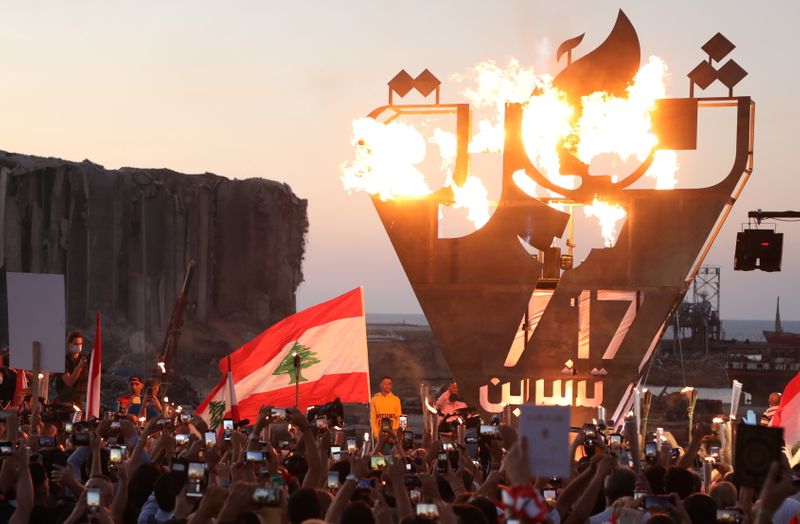 © Reuters. Anti-government demonstrators take pictures of a metal sculpture spelling out the word “revolution” topped by flames during a protest as Lebanese mark one year since the start of nation-wide protests, near Beirut’s port

BEIRUT (Reuters) – Demonstrators marched through Lebanon’s capital on Saturday to mark the first anniversary of a protest movement that toppled the government but was then overwhelmed by economic crisis, coronavirus and a devastating explosion in Beirut.

The demonstrations that broke out last October spread nationwide against a political elite that had ruled since the 1975-1990 civil war, presiding over an economic crisis and a collapse in the currency.

While the turmoil led to the resignation of prime minister Saad al-Hariri, politicians have since failed to form a government capable of addressing the country’s challenges.

The global pandemic and the Aug. 4 explosion at Beirut’s port, which killed nearly 200 people, brought further suffering and robbed the protests of momentum.

Those marking the anniversary in Beirut said they were not abandoning their demand for revolution and for President Michel Aoun to step aside.

“The revolution did not die,” said activist Rabih al-Zein. “We can hold this corrupt authority accountable and the proof is we brought down two governments.”

Hundreds of protesters marched past the central bank, a target of protesters’ anger over a financial crisis that has seen the Lebanese pound lose nearly 80% of its value, and the parliament building before gathering near the damaged port.

A metal sculpture spelling out the word “Revolution” and topped by flames lit up the evening sky in front of the port.

The protests come ahead of talks between Aoun and parliamentary blocs to choose a prime minister. Hariri is in the running to form a government, although obstacles remain.

The legitimate grievances of the Lebanese people have gone unheeded during a “harrowing year” of crises, said Jan Kubis, the United Nations special representative for Lebanon.

“People’s commitment to and yearning for deep reforms and changes continues to be strong, even if the momentum has receded,” Kubis said. “They have planted the seeds for systemic changes. One year on, their struggle continues.”

Direct flights between India and Germany to resume from Oct 26

The impasse on operating direct flights between India and Germany has been broken with Air India tweeting that it...

Collaborate with more universities to widen range of curriculum: Jitendra Singh to IIPA

The minister hoped that various state branches and chapters of the IIPA will also take a cue and extend...

The gains from the unlocking of the Indian economy are visible in the early bird results for September 2020...

When you buy shares in a company, it's worth keeping in mind the possibility that it could fail, and...

Wall Street muted with eyes on stimulus By Reuters

© Reuters. The front facade of the of the NYSE is seen in New York (Reuters) - Wall Street's...

All the Movies and TV Shows Coming to Netflix in November

Pakistan will not be able to escape FATF grey-list : Afghan lawmaker