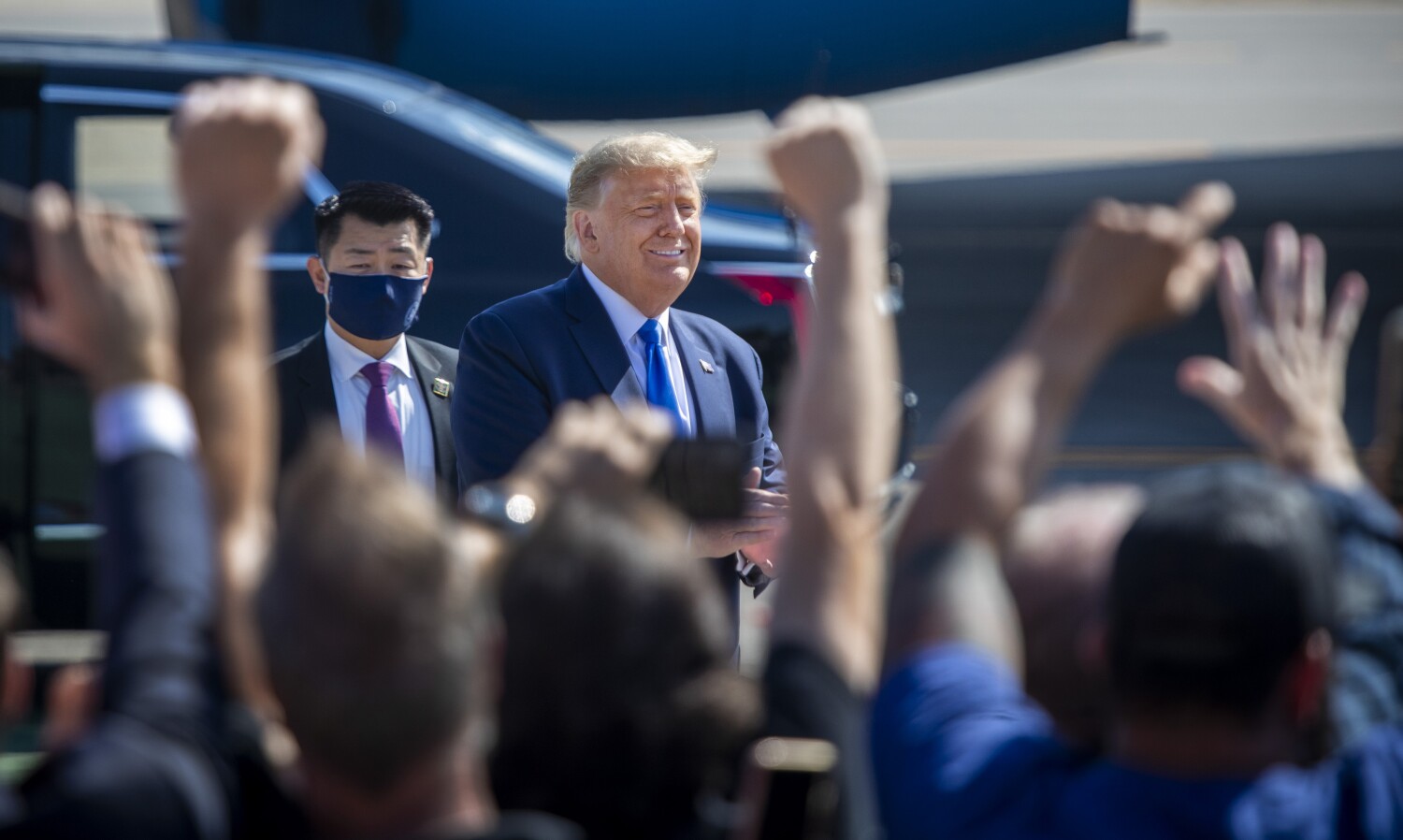 President Trump entered the final weeks of the campaign at a severe financial disadvantage to Democratic nominee Joe Biden, according to fundraising disclosures filed Tuesday night with the Federal Election Commission.

The gap helps explain why the president on Sunday — 16 days before election day — took hours off the campaign trail to headline a fundraiser in Newport Beach.

Both men have outside groups and party committees supporting their efforts. But the new numbers show how dramatically the finances for each campaign have changed in the 2020 election.

Trump began raising money as soon as he took office in 2017 and built a juggernaut operation that his campaign once referred to as “the Death Star.” But the campaign spent lavishly on travel and other unnecessary expenses, such as airing an ad during the Super Bowl, months before the president would be facing reelection, and broadcasting TV ads in Washington, a city whose voters will have no impact on the presidential race.

Biden was viewed as a lackluster fundraiser during the Democratic primary and did not show real strength until he clinched the nomination. Then, the money started to flow, until COVID-19 shut down in-person fundraisers.

Biden’s campaign aggressively raised money through creative virtual fundraisers, participating in events with the Democratic Party’s most popular politicians and a wide variety of supporters. Fashionistas could donate to hear Vogue editor Anna Wintour speak; foodies could see chef José Andrés; television junkies could hear from the casts of “The West Wing” or “Will & Grace.” Democratic donors were also galvanized by a number of events in recent months, none more so than the September death of Supreme Court Justice Ruth Bader Ginsburg.

All that led to Biden raising $383 million in the third quarter — $125 million more than Trump raised.

Biden’s financial advantage is easily visible on the airwaves, as he has expanded to airing ads in states once considered out of his reach and during NFL games. A minute-long ad calling for a “fresh start,” narrated by actor Sam Elliott, ran during Tuesday’s World Series opener.

“There is so much we can do if we choose to take on problems and not each other and choose a president who brings out our best,” Elliott said. “Joe Biden doesn’t need everyone in this country to always agree, just to agree that we all love this country and go from there.”

The Case for Neera Tanden

After enabling Trump and fretting about political correctness, Republicans want to cancel the OMB nominee because she was too...

Giuliani Is Said to Have Discussed a Pardon With Trump

The two Giuliani associates — Lev Parnas and Igor Fruman — were arrested in October 2019 as they prepared...

PPP loans and liability shields are not going to solve this. Give. People. Money. The capacity for the "bipartisan,"...

Chinese President Xi Jinping delivers a speech at the Great Hall of the People in Beijing, China, September 8,...

The San Diego Police Department has issued 82 citations for "seditious language" since 2013. Because such citations are considered...

Climate Case Against Shell Begins In The Netherlands : NPR

The Case for Neera Tanden

President Trumps Legacy of Mismanagement of the Pandemic — Global Issues

Borrowings: Six ways a higher credit score can benefit you