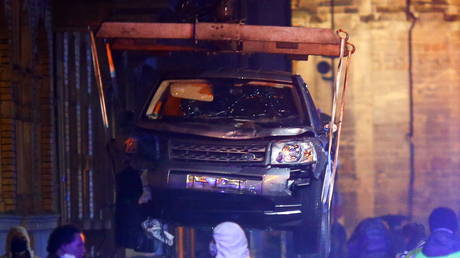 Police have confirmed four deaths in Trier, Germany after a car plowed into a pedestrian area. While the driver’s actions appear to have been intentional, the public prosecutor says there are no indications of an Islamist motive.

The driver, said by police to be a 51-year-old resident of the Trier-Saarburg area, drove a dark grey Range Rover through a pedestrian area of the city on Tuesday, sending victims “flying into the air,” according to witnesses. He was arrested at the scene, after police vehicles allegedly rammed his vehicle to stop it.


Rhineland-Palatinate’s state premier Malu Dreyer said that a baby was among the four dead, while Trier Mayor Wolfram Leibe told reporters that the aftermath of the incident “looks a bit like after a war,” while holding back tears during a press conference.

Speaking to reporters later on Tuesday, a public prosecutor said that the suspect was drunk at the time of the killings. The prosecutor added that the driver had no prior convictions and there was no indication his attack was motivated by Islamist or other religious beliefs.

According to prosecutors, the driver had a history of mental problems and will undergo evaluation to determine whether he will be taken into custody or sent to a psychiatric clinic.


In the aftermath of what Mayor Leibe called “the blackest day in the city of Trier after the Second World War,” police have asked locals not to share photos and videos of the incident online. Footage and photos from the scene show debris strewn across cordoned-off streets, as officers continue to investigate the incident.

Islamic courts have their own police force in KanoA 13-year-old boy who was handed a decade-long jail sentence for...

Europe’s top human rights court has found Russia responsible for a swathe of violations in Georgia’s breakaway regions after...

TWIN suicide bombs ripped through a crowded clothing market in central Baghdad this morning, in a suspected ISIS attack...

Goodthreads Sweater Demonstrates the Power of a Mock Neckline

U.S. Vaccine Supply: What to Know

Debt and COVID: One in five UK citizens borrow more amid crisis | Business and Economy News