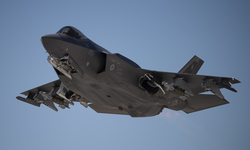 The United States’ ambassador to Greece confirmed in a statement today that Athens has sought to purchase Lockheed Martin’s advanced F-35 fighter jet amid tensions with Turkey in the Eastern Mediterranean.

“The United States, at the highest levels, has welcomed Greece’s interest in acquiring the F-35 for the Hellenic Air Force,” Ambassador Geoffrey Pyatt said in a statement.

Military Eyes AI, Cloud Computing in Space in a Decade

Machine learning in space may one day revolutionize how the U.S. military tracks enemy forces and moves data around...

WASHINGTON — The U.S. Army is dealing with excessive rotor blade vibrations in its latest variant of the Boeing-manufactured...

Electromagnetic spectrum could be cheaper option to defeat enemies

WASHINGTON — The Air Force is looking into flipping the cost curve when it comes to defeating adversaries by...

Why Bale should replace Bergwijn at Spurs

Skelton: He defended Obamacare. Now Becerra could take on COVID-19

Australia stocks lower at close of trade; S&P/ASX 200 down 1.93% By Investing.com