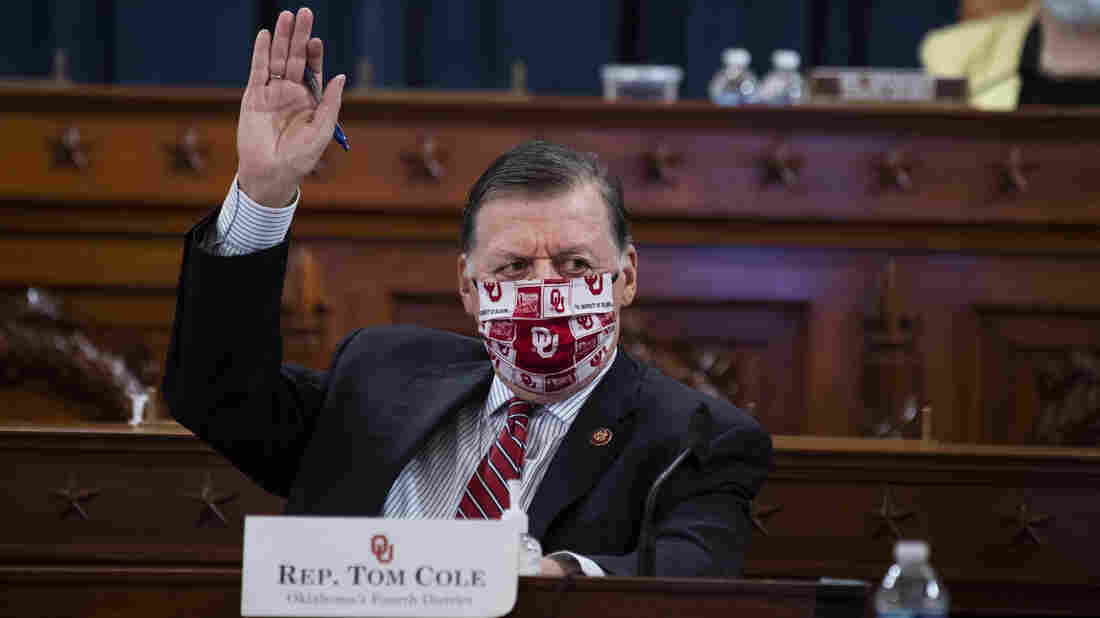 “We are coming off a horrific event that resulted in six deaths,” Rep. Tom Cole, R-Okla., said in his opening statement as House lawmakers began to debate a resolution to impeach President Trump.

The violent attack on the U.S. Capitol is “the darkest day” of his career in Congress, Rep. Tom Cole, R-Okla., said in his opening statement Wednesday as the House prepared to take up a resolution to impeach President Trump.

But pursuing impeachment, Cole said, would only further divide the country. And he noted that the effort comes one week before Trump is set to leave office.

“I can think of no action the House can take that is more likely to further divide the American people than the action we are contemplating today,” Cole said.

He spoke of the need to heal the country — an idea other Republicans also discussed in their short snippets of allotted time during the two-hour debate. And like others, Cole said the impeachment process is being rushed.

Cole, the ranking member on the House Rules Committee, spoke just after Rep. Jim McGovern, D-Mass., who chairs the committee. Both lawmakers gave their accounts of what happened during the insurrection on Jan. 6, along with the president’s role in it — and what should happen next.

“We are coming off a horrific event that resulted in six deaths,” Cole said.

Warning that the process could overshadow the incoming administration, he added, “We have an opportunity to move forward, but we cannot if the majority insists on bringing the country through the trauma of another impeachment.”

Urging his colleagues to vote against impeaching Trump for the second time in 13 months, Cole said there are other remedies to last week’s attack on the U.S. Capitol.

“The president is expected to face litigation over his role in last Wednesday’s events,” Cole said. “There will be criminal proceedings against the perpetrators, and I hope all those who stormed the Capitol will be brought to justice. And some members have proposed an alternative procedure, censuring the president, which could garner significant bipartisan support in the House.”

Here’s how Cole described the events of last week, as Congress worked to certify the victory of President-elect Joe Biden. The following is an excerpt from his speech:

“What started out as peaceful protests turned into a riot, as an untold number of individuals stormed the Capitol building. Six people died as a result of this mob, and it is only by the grace of God and the brave acts of the U.S. Capitol Police, the Washington, D.C., Metropolitan Police, the FBI, the ATF and other responding agencies that there was not more bloodshed. Violent acts such as these have no place in our republic.

“These shocking and sobering events rest high on our minds today, as well they should. Certainly, Jan. 6, 2021, will live in my memory as the darkest day during my time of service as a member of this House.

“After these grave events, we – as a nation, and as an institution – have an opportunity to come together. President Trump has conceded the 2020 election. Congress has certified the results of the election. And next Wednesday, President-elect Biden will be sworn in as the president of the United States. Congress and the nation can move forward, knowing that the political process was completed as designed and that the constitutional framework that has governed our republic since 1789 held firm.

“But instead of moving forward as a unifying force, the majority in the House is choosing to divide us further. With only a week to go in his term, the majority is asking us to consider a resolution impeaching President Trump. And they do so knowing full well that, even if the House passes this resolution, the Senate will not be able to begin considering these charges until after President Trump’s term ends.

“Mr. Speaker, I can think of no action the House can take that is more likely to further divide the American people than the action we are contemplating today. Emotions are clearly running high, and political divisions have never been more apparent in my lifetime. We desperately need to seek a path toward healing for the American people.

“So it is unfortunate that a path to support healing is not the path the majority has chosen today. Instead, the House is moving forward erratically, with a truncated process that does not comport with modern practice and that will give members no time to contemplate this serious course of action.

“In every modern impeachment inquiry, an investigation and committee action has preceded bringing an impeachment resolution to the floor. In part, this is to ensure that members have full facts, the opportunity to engage expert witness and have the chance to be heard. It also provides due process to the president of the United States, and again, in every modern impeachment inquiry the president has been given an opportunity to be heard in some form or another. This is necessary in order to ensure that the American people have confidence in the procedures the House is following. And it is also necessary not because the president’s inappropriate and reckless words are deserving of a defense, but because the presidency itself demands due process in impeachment proceedings.

“Unfortunately, the majority has chosen to race to the floor with a new article of impeachment, forgoing any investigation, any committee process or any chance for members to fully contemplate this course of action before proceeding. [George Washington University law] professor Jonathan Turley is correct when he called this a ‘dangerous snap impeachment – an impeachment that effectively would go to a vote without the deliberation or inquiries of a traditional hearing.’

“Professor Turley also noted that ‘the damage caused by the rioters this week was enormous, however it will pale in comparison to the damage from a new precedent of a snap impeachment…’ If the majority is seeking consensus, this is hardly the way to create it. The majority is failing to provide the House with an opportunity to review all of the facts – which are still coming to light – to discuss all of the evidence, to listen to scholars, to examine the witnesses and to consider precedents. This is not the type of robust process we have followed for every modern impeachment, and the failure to do so does a great disservice to this institution and to this country.

First lady Dr. Jill Biden delivered cookies to members of the National Guard in Washington, D.C., on Friday to...

Tyrese Haliburton was there for the taking when the Knicks got on the clock with the No. 8 pick...

LOS ANGELES (CBSLA) – Following a week of unseasonably hot and dry conditions, a series of winter storms is...

Mega Millions $1 billion jackpot is the third largest in US history. The winning ticket was sold in Michigan.

Canadian prime minister was the first foreign leader to speak with the new US president in a call highlighting...