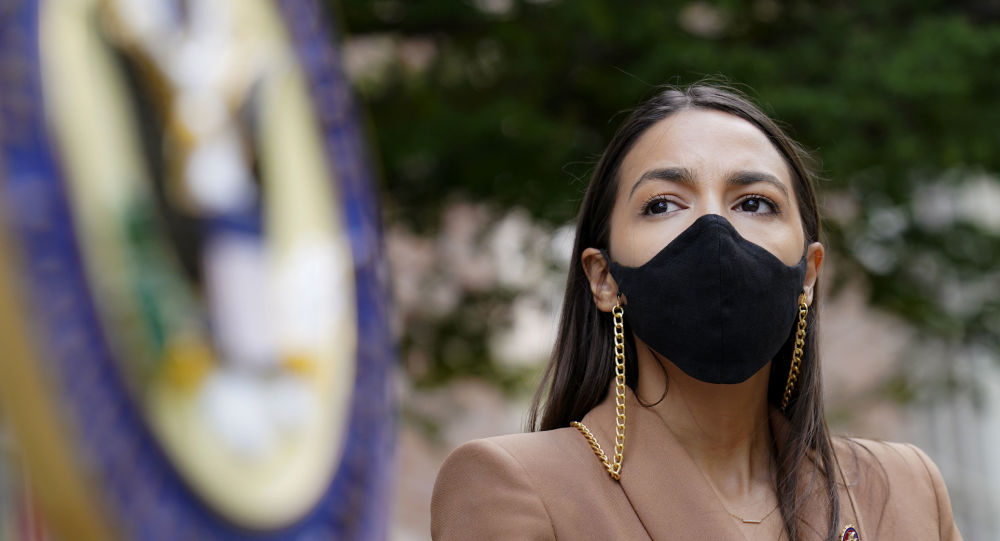 Democratic firebrand Alexandria Ocasio-Cortez was among the first members of Congress to call for incumbent President Trump to be impeached for “inciting the insurrection” in the wake of the deadly rampage on Capitol Hill last week.

Democratic NY Rep. Alexandria Ocasio-Cortez has shared with her Instagram subscribers that she had the impression she wouldn’t live to see the end 6 January, the day the Capitol was swarmed by Donald Trump supporters.

During a live Instagram broadcast, she noted she was not sure if she could go into detail about her “traumatising” experience inside the federal legislature’s seat due to security concerns, admitting she had had “a very close encounter” with the rioters during which, she said, she thought she “was going to die”.

Ocasio-Cortez went on to recount how some of her fellow Congress members rushed to huddle in a “secure extraction point”, but the congresswoman said she didn’t feel safe to join them because of “QAnon and white supremacist sympathisers, and frankly white supremacist members of Congress in that extraction point, who I know, and who I had felt would disclose my location… who would create opportunities to allow me to be hurt, kidnapped”.

She said she felt insecure even around her colleagues, and “to be kind of fending for yourself in that way is traumatising”, she said.

The congresswoman further attempted to classify those who surrounded her during the chaos, which saw “many of us merely and narrowly escape death”, she pointed out, singling out Capitol police officers, who were “quite heroic”.

“There were also Black and brown officers that were confronting white supremacists and putting themselves, not just to protect members, but they put themselves in harm’s way”, the lawmaker said with praise, going on to admit that along with acts of heroism, there were also “acts of betrayal”.

“And to run in the Capitol, in our nation’s capital, and not know if an officer is there to help you or to harm you – it’s also quite traumatising”, she described her dismay on the Capitol premises.

Ocasio-Cortez was among the first members of Congress to call for Trump to be impeached a second time for “inciting the insurrection”, which made up the single impeachment article presented by the Democrats. The lawmaker also struck back at Republicans over the weekend, after they claimed such a move would further destabilise the political situation in the country, while Joe Biden is preparing to take the reins of power in a week.

“The process of healing is separate and in fact requires accountability”, she told ABC News’ George Stephanopoulos, “because without it, it will happen again”.

She also had her say on senators who had supported Trump in his bid to challenge the election results, blasting them for their “lust for power”.

“I want to be clear, to Senator Ted Cruz”, she said. “You do not belong in the United States Senate”, Ocasio-Cortez charged, going on emphatically:

The House has geared up to vote on an article of impeachment accusing President Trump of “inciting insurrection” on 6 January, when Trump supporters breached Capitol Hill in droves, sitting in Congress members’ seats, and occupying their offices as they were certifying the results of the presidential vote.

The Democrats instantly blamed the incident, which claimed five lives, on Trump, who had spoken moments before the siege at a rally in Washington, DC.

Democratic lawmakers voiced calls for Vice President Mike Pence to invoke the 25th Amendment to remove the president merely days before his successor Joe Biden takes the oath of office.

The US Senate on Friday confirmed Joe Biden’s nominee, Lloyd Austin, to serve as secretary of defense, making the...

AstraZeneca has warned the EU’s executive that there will be delays to its delivery of Covid-19 vaccines in the...

Five million in the U.K. have gotten a vaccine and officials hint the variant may be more deadly, though it’s too soon to tell.

For weeks, Britain has reported alarming coronavirus death numbers, hospitals have continued to fill up, and fears have risen...

What legal woes does Trump face as he begins civilian life? | Courts News

Former US President Donald Trump could face serious legal challenges as his return to civilian life strips him of...

Protecting Mental Health of Families in a Pandemic — Global Issues

How the US plans to improve its missile warning satellites

Pandemic Numbers Are (Finally) Tiptoeing in the Right Direction

Short Squeeze Sends GameStop Shares to 2007 Levels. What Happens Next.

Data shows 62% of Apple TV+ subscribers are on a trial, most don’t plan to renew