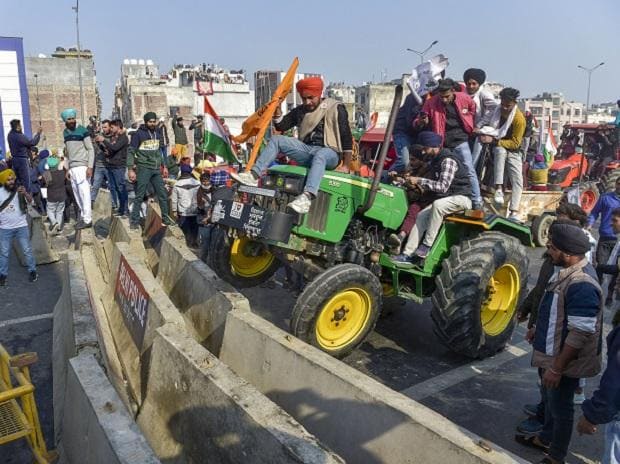 Farmers attempt to break a barricade at Ghazipur border as they participate in Kisan Gantantra Parade in protest against Centres farm reform laws, on the occasion of 72nd Republic Day, in New Delhi. Photo: PTI

Farmers’ protest LIVE updates Day 61: Police today used tear gas on groups of farmers when they tried to break past barricades and cemented barriers with tractors at Delhi’s Mukarba Chowk for the unprecedented ‘Kisan Gantantra Parade’.
Groups of protesting farmers camping at Singhu, Tikri and Ghazipur border points of the national capital broke police barricades on Tuesday morning to force their way into the city, before the time allotted by the Delhi Police for their tractor parade.
Numerous tractors bearing flags assembled at the border points of the national capital with men and women dancing on drum beats as locals gathered on both sides of the road showering flower petals them.

Security personnel have been trying to convince the farmers to stick to the plan of holding the tractor parade after the conclusion of the Republic Day parade at Rajpath.

The protesting farmers have also announced a foot march to Parliament on February 1, when the annual Budget is presented, to press for their demands including a repeal of the three new agriculture laws.

The farmer unions, protesting for nearly two months against the three new Central farm laws, had said on Monday that their tractor parade would start only after the official Republic Day parade on Rajpath concluded.

Nifty today: SGX Nifty gains 14 points; here’s what changed for market while you were sleeping

Domestic stocks may take a breather after rallying in the previous two sessions, thanks to mixed signals from other...

© Reuters. Logos of ExxonMobil are seen in its booth at Gastech, the world's biggest expo for the gas...

Staff at some major U.S. firms to keep masks on in Texas even as state lifts mandate By Reuters

2/2 © Reuters. FILE PHOTO: FILE PHOTO: The logo of automaker Toyota is seen on a car in France...

Planting problems: Unscientific plantation leading to no gains for environment, a new report points out

The need is to become scientifically rigorous on tree plantation; with drastic climate change becoming an unyielding threat, there...

Washington state’s marijuana regulatory agency has a new executive. David Postman was appointed chair of the state’s Liquor and...

Why S’pore Firms Should Invest In A Speakerphone For Meetings

Nifty today: SGX Nifty gains 14 points; here’s what changed for market while you were sleeping